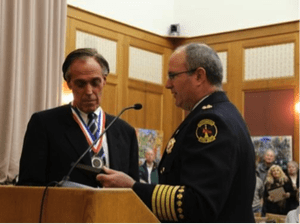 On November 4, 2011, Leonard Feldman, a 86 year-old resident of Highland Park, collapsed from an apparent heart attack while dining at a local Northbrook restaurant. Dr. Steven Valfer, a Northbrook doctor, was a patron of the restaurant and was the first to reach Mr. Feldman. Dr. Valfer quickly determined that he was not breathing and had no pulse. Dr. Valfer began administering CPR, performing chest compressions to an unconscious Mr. Feldman, while other restaurant patrons called for emergency assistance.

Dr. Valfer continued administering chest compressions until Northbrook paramedics arrived to begin advanced life support treatment. Paramedics hooked Mr. Feldman up to the cardiac monitor and defibrillator, and through the use of this equipment he regained a normal heart rhythm and pulse. He began breathing on his own and was stabilized in the ambulance while being transported to Highland Park Hospital. Mr. Feldman recovered and was released from the hospital a few days later. Dr. Valfer’s quick thinking and efforts while awaiting a paramedic response certainly saved Mr. Feldman’s life.

Several anonymous citizens, in addition to Dr. Valfer, worked purposefully together to help Mr. Feldman. They called 911, cleared the area for arriving emergency personnel, and guided the paramedics to the patient. The combined efforts of the aforementioned citizens on November 4, 2011, are also recognized this evening. Their combined quick thinking and appropriate actions helped to save Mr. Feldman's life.

Dr. Valfer has also been recognized by the American Heart Association with their “Heartsaver Hero Award” for his response and CPR efforts.

NOW, THEREFORE, BE IT RESOLVED, by the President and Board of Trustees of the Village of Northbrook, County of Cook and State of Illinois, THAT:

On behalf of the entire community, our highest praise and gratitude is hereby extended to Dr. Steven Valfer for his quick actions and unselfish efforts on November 4, 2011.

Making a doctor takes longer than making a baby, but now, after several years of education, a Deerfield father and daughter are able to offer obstetrics and gynecological services from...