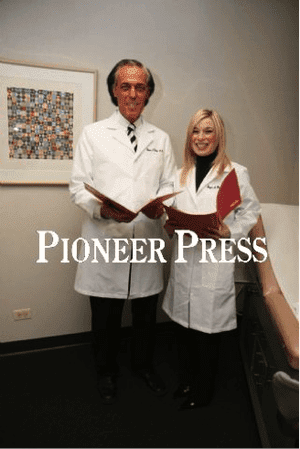 Making a doctor takes longer than making a baby, but now, after several years of education, a Deerfield father and daughter are able to offer obstetrics and gynecological services from their joint Highland Park Obstetrics-Gynecology practice located in Northbrook.

Dr. Steven I. Valfer, a practicing obstetrics and gynecological physician for 30 years at Highland Park Hospital, is working with his daughter, Dr. Regan Valfer, in his practice now that she has completed her education at Loyola Medical School and four-year residency at Lutheran General Hospital. They have their own patients but also work together on occasion.

"We have a wonderful relationship," said Steven Valfer. "I've enjoyed it. We've done a couple of deliveries together."

Helping mothers give birth is an emotional and exciting experience, even for the attending physicians. The Valfers deliver babies at Lutheran General and Rush North Shore hospitals.

Regan Valfer said it is not that unusual for parents and children to practice medicine together, although she was not aware of another daughter-father obstetrics partnership.

"Not a lot of fathers and daughters go into this," she said.

Regan Valfer grew up in Deerfield, attended Deerfield High School, went to the University of Pennsylvania and graduated from Loyola Medical School in 2003. Despite the years in college, it was not always a foregone option that she would go into medicine, she said. The quality of her education in Deerfield gave her many options, she said, but ultimately she was attracted to medicine and delivering babies specifically.

"I wouldn't be where I am today without the foundation I got with my local education," Regan Valfer said. Plus, "I think there are a lot of warm and caring individuals willing to help mentor and be supportive (in Deerfield)."

Regan Valfer enjoyed her math and science courses in high school. She also benefited by the fact the teachers broadened her horizons into other areas of study, especially with advanced placement courses in the social sciences such as history. It gave her a more diverse education, she said.

The original impetus, of course, came from her father.

"My father has always been an inspiration," she said.

She could see up close in their homelife how passionate he was about his work and care for patients. It made her want the same type of experience in her life. By working in medicine, she too found the same dedication to patients

"Obstetrics is a world of its own," she said. "It's a gift to work with people at such a wonderful time in their life. It's wonderful being in practice (now), but especially incredible working with my father."

She is now settling into what she expects to be the practice of medicine for many decades.

Services We Offer & Conditions We Treat

Office Hours
Get in touch